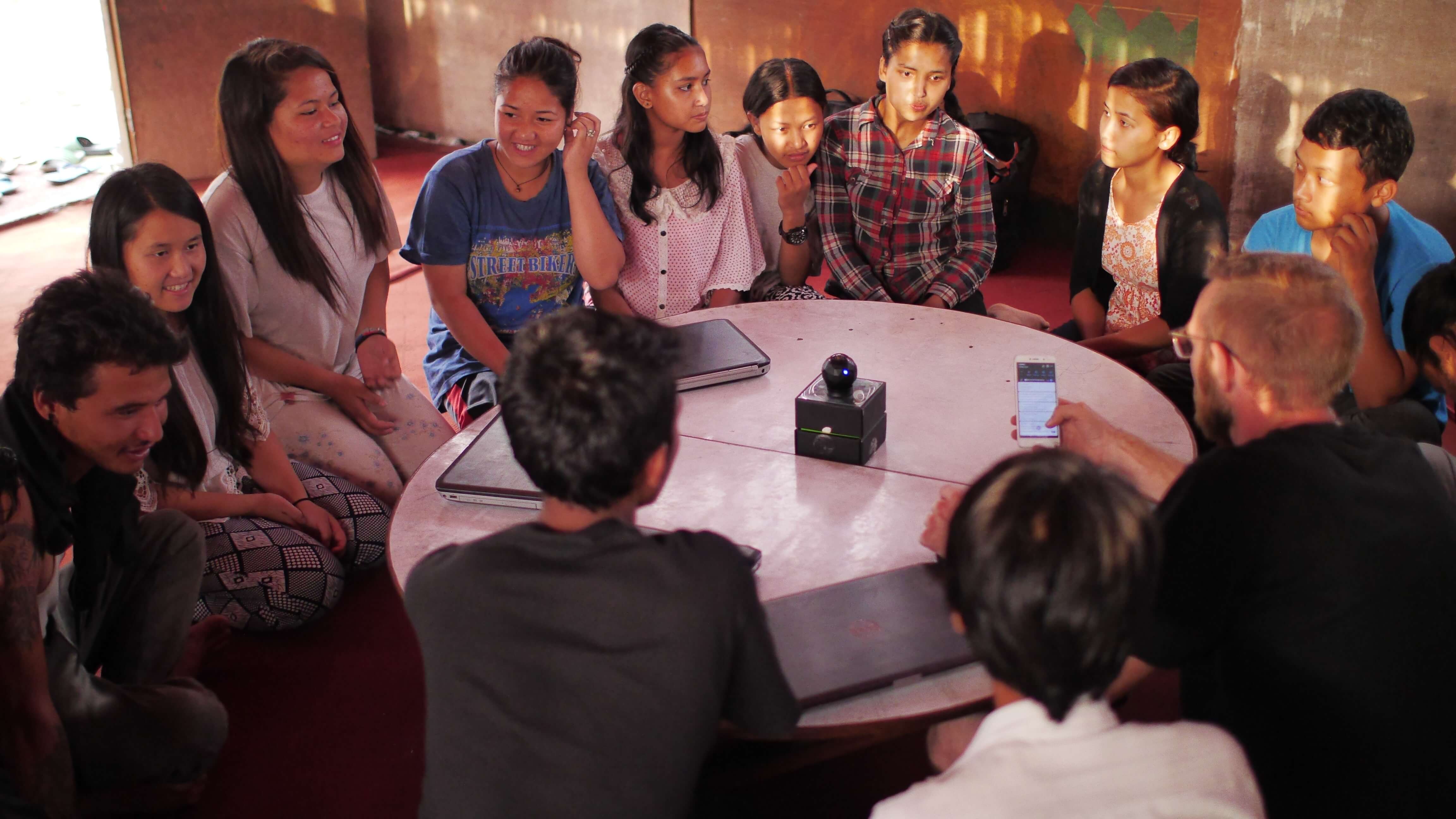 Our experience designing and presenting the recent Community Lawyering training has many elements of the mythic hero story. Such stories always involve a journey and include a number of core elements. The hero leaves her comfortable, ordinary surroundings to venture into a challenging, unfamiliar world. The journey may be an outward one to an actual place (barren desert, dark cave) or an inward journey of the heart, mind or spirit. At its resolution, the hero may end up in a new physical place or return full-circle to where she began; in either case, she is transformed in fundamental ways.

These notions of myth and story are prominent in our experiences with the Community Lawyering training. They provide a metaphor for the journeys we underwent as individuals and as a group, leaving behind our original concepts of our roles as legal aid advocates and exploring new ways to understand and respond to community problems and issues. We also came to realize the pervasiveness and power of stories, how they influence the ways individuals and communities see themselves and their roles in the world; how stories reflecting the dominant culture, in which the communities we work with are either negatively portrayed or ignored, perpetuate and reinforce those communities’ and our own feelings of hopelessness and despair; and, conversely, how creating space for community residents to themselves tell stories of their own lives and dreams represents a powerful force for change. Finally, our use of stories and storytelling during the training itself was a highlight of the three days and confirmed its use as a potent vehicle for engaging participants intellectually and emotionally, building community, and achieving other training goals and objectives.

Our journey began at a time that, at first glance, was inauspicious. Our clients were facing cut after cut to the most basic of services. At all levels of government — federal, state and municipal — safety nets were eroding. Legal aid programs, too, were losing funding; advocates were concerned about their own job security as well as that of clients. In times of retrenchment, we typically pare back to what is most essential. In legal services practice, this frequently means narrowing intake to meet what we see as the most critical needs of the individuals who contact us for help. In developing the community lawyering training, we realized that there is an even more basic and essential level of service: listening to the needs and aspirations — the stories — of the communities we serve, and helping them develop the capacity to ensure that their stories are heard and effectively influence the local, state, and national debates that affect their lives. This response expands rather than contracts our programs’ abilities to meet these needs, because it places legal aid in partnership with low-income communities and other allies. As we listened to design team members’ and community leaders’ stories, we realized that this work requires not a giant leap of faith, but rather the utilization of tried, true, and teachable skills. It also affirms, and for many, returns us to the hopes and values that led us to choose to become legal aid lawyers.

Leaving Behind the Familiar

Greatly influenced by our colleague Gary Bellow, who worked with us on the design and presentation of that training, we hoped to dust off the old training design and do some minor tinkering. However, at our initial design meeting, team members1 brought experiences and perspectives that quickly transformed our task. They described experiences working with community groups to create structures for providing vital services such as community-based health centers or affordable housing, assisting in community economic development activities that brought jobs and resources into low-income communities, helping new and existing grassroots groups through the processes of incorporating, developing by-laws and convening boards of directors. What stood out for us most in these descriptions B and challenged us in designing the training B were the less “action-oriented” and quantifiable aspects of the work: listening to and learning from communities, building relationships with individuals and groups by conducting one-on-one conversations, attending community events and serving on community organization boards. Advocates were describing the myriad activities B often unacknowledged within legal services programs B that build the capacity and develop the leadership that supports community residents’ abilities to participate fully in the processes and decisions that affect their lives. And while these latter activities represented a significant departure from what we typically think of as “legal”work, they seemed to be at the heart of what distinguishes community lawyering from more traditional legal aid practice.

Discoveries & the Beginning of Transformation

Our design team also introduced us to the recent focus on community lawyering within the national legal aid community, academia and the foundation world. The examples presented at conferences and described in the ever-expanding literature on community lawyering were inspiring but only of limited use since our task as a training design team was to develop curriculum through which advocates could learn how to practice community lawyering. To make a long “story”short, we identified a set of core values that reflect our understanding of the defining features of “community lawyering” as well as core competencies and learning objectives for each. (See accompanying box) While many of these elements are familiar to both lawyers and community organizers, we took them a step further by developing a conceptual framework specific to community lawyering, and identifying both the necessary tools and the discreet steps that advocates need to be successful in this approach.2 We melded this at every level with storytelling. It was this combination of theory, skill building and storytelling that made the training so successful. The stories were both practical and inspiring; through them, participants experienced the relevance of the tools and theory they were learning, and at the same time used the stories to challenge and affirm this teaching. We concluded that community lawyering, as we had come to understand it, is defined thus:

Community lawyering refers to a wide range of community building and advocacy-related activities through which legal aid advocates contribute their legal knowledge and skills to support community-identified initiatives that return power to the community. Its goal is to support lasting changes that bring about social justice.

Our approach to community lawyering contains elements of three major practices: community development, a results-oriented process for increasing a community’s economic, housing and other resources; community organizing, a vehicle for mobilizing communities to work on short, winnable, issue-oriented campaigns against specific targets with the longer terms goal of creating self-sustaining community-based organizations capable of attaining even greater changes; and community building, a vehicle for increasing the “social capital” within a community — identifying community resources, building new relationships among community members and nurturing new leaders. Inherent in the work of community building is a shift from a deficit approach, which focuses primarily on a community’s problems (violence, unemployment, poverty), to an asset approach which identifies a communities’ resources (civic associations, local institutions, religious organizations, individual talents and skills) and builds links among them so that together community residents and organizational partners can take action. For us, community building is the basis of community lawyering; it creates the necessary structure to support community development and organizing.

Utilizing and building upon the above three practices, legal aid advocates then contribute the skills and resources — legislative and policy advocacy, litigation, transactional work, etc. ¬that are unique to their training and experiences as lawyers and, that can provide additional leverage when pursuing community goals. From this understanding of community lawyering, we were able to define our core competencies. Competencies are defined as the skills, knowledge or abilities that can be developed through education, training and practice. They were our first step in breaking down the elements of community lawyering into discreet components. These competencies are listed in Box A, together with the Core Values that also flowed from our definition of Community Lawyering. These Core

Values both explicitly inform the way we see the advocate’s roles in relation to the communities with which they work, and underlie the concepts and tools included and developed for the community lawyering training.

Our initial idea was to develop a roadmap for participants. For example, an advocate begins by finding out who the community leaders (formal and informal) are, meets with them to develop a relationship through the use of one-on-ones, identifies together the problems facing the community, turns them into issues, etcetera. But no matter how we structured this road map — as an ordered series of events, as a spiral that repeats certain skills such as power-mapping again and again — we realized that this work does not lend itself to neat presentations, that our involvement with community groups may begin at many points, and that the community groups themselves will be at various levels of development. And as their sophistication grows, so will the scope of their vision and the depth and breadth of their power. So we abandoned our graphic representations of the community lawyering process, and instead ordered our skill-building exercises to correspond to the unfolding case story. 3 We found a difference in the quality of participants’ engagement with these exercises before and after they saw the video. Even in small groups, their initial response was primarily intellectual. After seeing the video, participants were also engaged emotionally, and this fueled their desire to understand the processes we were going through (such as turning problems into issues, choosing issues and power mapping). Our skill sessions are detailed in Box B.

Story-telling as a Training Tool

Storytelling was the vehicle through which we engaged participants emotionally as well as intellectually. We used these stories in several ways:

The participants were thoroughly engaged in this scenario, which was supplemented with documents about the school system, the political structure of the town, and the connections the parents had to institutions or individuals with power. They struggled for days with the question of whether the parents had made the “right” decision, whether it was truly their choice and not the lawyer’s, and how they felt about the group choosing the bricks and mortar issue when there was an exciting (for the advocates!) discrimination case brewing.

We purposefully developed a case study involving education. We wanted an area of law outside the expertise of most legal aid advocates, and we wanted a scenario that could be resolved by bringing the power of the community to bear on local officials capable of giving them what they wanted.

Using stories as the basis of skills workshops (working with the media, examining identity and difference, etc.). This happened in two ways. In the media workshop, for example, participants used the case scenario as the basis for developing media strategies. In the workshop on identity and difference, advocates, working in small groups used stories from their lives. Participants’ responses to their group members’ narratives continued beyond the workshop.

Challenges along the way

We encountered a number of challenges in the course of our journey — some anticipated, others not — and we learned a great deal by listening to these concerns and engaging in dialogue within our group and with others about them. In doing so, we both refined our thinking about specific issues and, hopefully, became more adept at communicating our ideas.

The first delivery of the Community Lawyering training marked a resolution of many of the questions and challenges we wrestled with during the design process B and left us with some new ones! The extraordinarily high level of enthusiasm and energy during the training itself was due, we think, to a combination of factors:

We left the event filled with many emotions: proud of our collective work, energized and inspired by participants= and trainers= commitments to working together and in new ways on issues of economic and social justice, and challenged to undertake the next phase of our journey, this time with a larger and increasingly enthusiastic group of fellow-advocates.